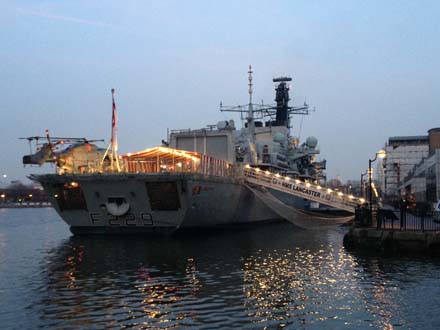 On a fine but cold evening, a party of twenty or so Feltmakers, led by the Master, several past Masters and the Clerk, attended a reception on board our affiliated ship HMS Lancaster. We joined a number of other groups including members of the Royal Household, the Constructors Company and a brewery from Lancaster. (The ship has its own ales!). 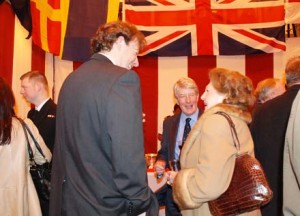 Could they really squeeze this vessel into such a small network of docks nestling under the skyscrapers of Canary Wharf? Well, yes they could but not without a little scrape or two on the way, we were told.

We were warmly welcomed on board by members of the crew. The ship’s Lynx helicopter had been evicted for the evening to make way for us in the hangar. The area had been bedecked with flags which apparently spelt out ‘Welcome to HMS Lancaster’. An hour and a half passed amazingly quickly and there hardly seemed enough time to ask questions (and receive informative answers) from the crew members. They are proud of their ship and what it achieves (and rightly so).

The evening ended splendidly with a short address by the commanding officer, Commander Steve Moorhouse, followed by a ‘ceremonial sunset’ performed by Royal Marines and crew members on the aft deck. This was an excellent finish to a memorable evening.

Many thanks are due to HMS Lancaster for organising this event and for hosting the evening so splendidly. The only note of disappointment was that Her Majesty the Queen was unable to visit her ship on the following day, as planned, due to illness. 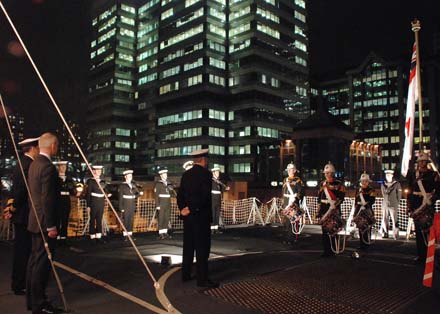 View all posts by petershirley