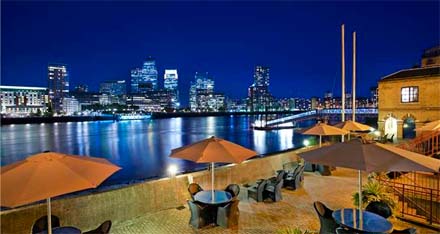 The spectacular waterside setting of the Hilton Docklands Riverside hotel was the venue for this year’s Livery Society Dinner. The ultra-contemporary entrance belies the exposed brickwork and beams within, revealing the hotel’s origins as a warehouse.

In keeping with tradition, Liverymen of 10 years or less share a relaxed evening of good food and stimulating conversation on a less formal and smaller scale than some of the Company’s other events.

We were most fortunate to be joined by our Master and the Clerk who shared a convivial pre-prandial drink with us before we were led into The Old Library. Here we dined on a perfectly balanced menu of warming, spicy Spinach and Nutmeg soup, followed by Guinea Fowl or Sea Bass and rounded off with a tangy cheesecake. The menu was later passed around the table for each of use to sign as a memento for the Master of a happy and entertaining soiree.

These evenings are always an ideal opportunity to get to know fellow Liverymen a little better and this was no exception. The Library was soon filled with lively banter, as several of us reminisced about the unforgettable experience and privilege of participating in the Lord Mayor’s Show.

The Master highlighted a particularly appealing element to his fund-raising event – a wine tasting, artfully called What’s my Wine? Each of three wine specialists will attempt to persuade the diners that they are drinking the wine they are describing rather than as described by their fellow panellists. The challenge for the diners is to guess who is actually telling the truth. In addition, the Master mentioned there would be a silent and live auction and encouraged the Livery Society to donate Lots to the generous contributions already offered and to take a table.

As our Livery Society evening drew to a close, we were afforded the opportunity to take a snifter of brandy onto the balcony and absorb the impressive outline of Canary Wharf, illuminated against the inky, night sky.

Our grateful thanks to Simon Millar for organising the evening and to Simon Wood for providing the venue.

View all posts by petershirley